Letters From The Civil War

You will each take place in, and survive, two Civil War battles. You will write letters about your experience in both of them as well as the time in between the fighting. This will result in three letters written by each person. 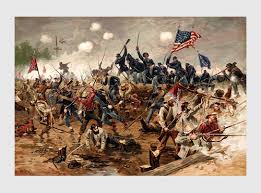 For each letter written after a battle (2 letters each), you must include:
 The name and date of the battle
 Who was your leader in the battle? (Which general?)
 What types of weapons were you using?
 What was the fighting like? Where did it take place? Did you win?

For each letter written in between battle (1 letter each), you must include:
 What was it like to be a Confederate or Union soldier?
 What kind of uniform did you wear?
 What did you do to pass the time?
 What did you eat?
 Where and how did you sleep?

Also, in any one of your letters, please answer the following:
 Do you agree or disagree with the causes of the war? Why?
 Would you change sides if you could? Why or Why Not?

Remember, these letters are being written to your best friend. You should write them with that in mind. Think about how you write letters (or e-mails) to friends in your life now. These letters should sound very similar, but use proper English, please!

Battles for the Union Soldier: The First Battle of Bull Run and the Battle of Vicksburg

Battles for the Confederate Soldier: The Second Battle of Bull Run and The Battle of Gettysburg

You will use these fact sheets to write your 3 letters later on.

Use the following websites to conduct your research:

The Civil War For Fifth Graders

The Civil War For Kids